(This post on black-on-black crime is satire. Thought I would point that out before someone gets too upset over it.)

A Georgia state lawmakers showed concern about the amount of black-on-black crime. He is obviously referencing the FBI homicide statistics for perpetrator race. Fortunately the actual number is lower than the 98% he claimed. But he’s not wrong that a large majority of homicides of black people are by another black person at 90% in 2013. Here is the thing. The same table shows 83% of white homicides were by another white person. It seems likely both communities have a common problem. They both spend too much time around people of their own race.

If your true goal is to lower black-on-black crime rates or white-on-white crime rates, then the best solution is to effectively mix the races so much they are willing to murder across racial boundaries. People tend to kill the kinds of people with whom they spend their time. If you rarely are around people of another race, then your opportunities are fewer. Mixing the races such that people are just people will do wonders to ending the black-on-black crime problem.

His remarks though were that all this concern about eviscerating the Confederate flag or memorials were to hide this black-on-black crime problem and other issues with the black community. He also describes the KKK as vigilantes necessary for law and order. So I in no way expect him to agree better racial integration is an appropriate solution.

Iran and the United States managed to swap prisoners and make some positive steps in the nuclear deal while taking a step back with sanctions on a nuclear test. Listening to the news this morning, they were talking about the “relationship” the these two have at the moment. My thoughts were, “This is no relationship. This is a later stage of a really bad breakup.” (Yes, I know this is a gross oversimplification, but that is pretty much the point.) 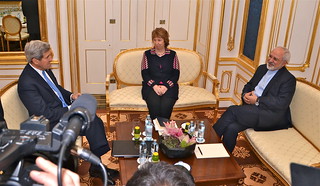 See, back in the time of the Shah, the United States had an extremely cozy relationship with Iran. Like boyfriend and girlfriend, they were lovey-dovey. Sickening to watch, really. Think how the USA is with Saudi Arabia now. (Too soon? Naw.) Iran was out favorite girl in the region. The Shah could do no wrong in the USA’s eyes. Which, might be part of why he was overthrown.

When that happened, Iran broke up with the USA. Like messy break ups, tears were shed, photos burned, and screaming about whatever was said made other countries uncomfortable at parties with them to the point people kept the two apart. Over the years, the two sides have become… Not reasonable but less than eye roll crazy. They can be in the same room without it becoming a scene. Time will tell if they can really be allowed to attend the same parties. But the signs are ever so slightly promising.

The “relationship” is that of exes who have seen the light that no one else sees the other as the crazy one. Both of them are know they better act like adults if they wish to be respected. Neither particularly likes this situation but grudgingly behave as though they do. Both are looking for any sign to point out the other is still the worst evil that ever existed. Both know the other seeks that, so they will behave better so as to not give the other the opportunity to make them look like the bad one.

Amazon heavily pushed their Kindle Unlimited product the past couple months. Basically, it is a Netflix for books kind of service where you can read whatever you want for $10 a month. With over a million titles, there should be plenty of titles I’d read. I was whining about the frequency of the same ad not about getting them in general.

I am a likely candidate as I have read 113 books bought and read through the Kindle service. (Not sure how many loaded through USB.) This is Amazon’s own data through the Your Books page. I also have two in progress and about 200 more I still need to read. So, obviously from their perspective, I am a reader, so I get their pushing the Unlimited product. But, I at least want to get the unread number down to 10-20 before opening consideration of Unlimited or one of the rivals.

However, it got to the point I was getting near daily notifications (both phones and tablet). I went looking for a setting in the Kindle to make the madness stop. Not finding a way on my own, I emailed support to explain I get how by the numbers I am exactly who they want as a customer, but how can I stop getting these notifications?

Harendra said he made a change to stop that advertisement. That was great. BONUS: My advertisement supported Kindle? No longer has any ads. The inquiry was sent from my phone app and the reply contained the original which clearly noted the phone model in it. So, I imagine if they could just stop it from the app, then they would. That suggests they have no real granular control over what is advertised or what notifications. Just whether or not we get them. I’ll take it.

Of course, I have had this Kindle for about five years and have bought dozens of things through it, so it is also possible Amazon feels they have gotten their money’s worth out of it.