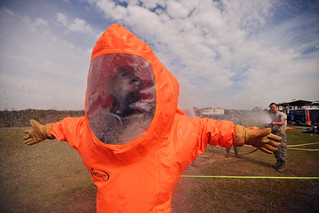 Earlier there was some kind of emergency alert pushed out to mobile phones by the state. The current and prior phones are capable of getting presidential and imminent threat emergencies plus Amber alerts.

I never know what they are about because in the freak out about Why In The HELL IS MY PHONE DOING THIS?!?!?! the reaction is to stop it as fast as possible. And then I figure out to disable them. In the process I completely forget that there was something people wanted me to know. I just know I do not want to get these alerts anymore.

If it is actually an important emergency notification, then I guess someone else will tell me.

Same thing with my TV. Back when the TV channels delivered them, they were not so bad. It was just a few seconds of annoying noise and nothing to be done except mute the TV, but by the time I found the remote usually it was over… so why bother? But with my current setup the noise is excruciating and terrifying and keeps going until I stop it.

Thankfully the noise with the radio is not that bad. I’m terrified of going to satellite radio in fear they have gone the mobile or DVR route of “advanced technology” means scare the crap out of listeners.