Had a conversation with a restaurant manager when he said he hates computers. His life has gone from 90% working with food to maybe 60%. Naturally he did not get into this kind of work to spend so much time dealing with computers. 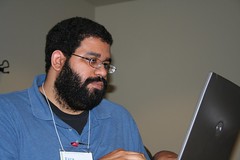 At first I thought the issue was empowerment. A few decades ago, important people had assistants to do all their minutia. They did not write letters so much as quickly express what it should say, someone else wrote, and had it approved before going off to send it. Now, important people write an email themselves. Well, more so than they used to do. Technology has made minutia easier and changed assistant jobs into accomplishing more complex tasks.

As it turns out the issue was more organizational complexity. The manager’s accountant found a mistake and told him to talk to another department who sent him to third who sent him to a fourth. Each admitted the mistake should be fixed, but none could correct it.

Sound familiar? You might have encountered it dealing with customer support with a utility or government agency. The organization is so big and so complex individuals within it are not capable of knowing where to direct customers to have the problem solved. Only the most tenacious can force the difficult issues. When employees are empowered with autonomy to make decisions and solve problems, they make things move along and keep customers happy.